Work is progressing on the hyperbaric area at the New Royal Adelaide hospital. The chamber, Air recievers and Deluge tanks, which were shipped from Fink Engineering’s works in Queensland before the festive season, are now in position in the hyperbaric area which is starting to take shape. The hyperbaric plant room is nearing completion which will allow the compressors to be loaded in and the supporting pipework to be run to the chamber area. 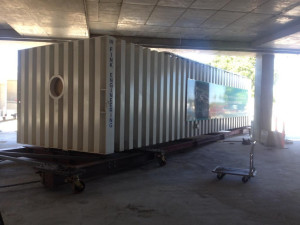 Triple Lock Hyperbaric Chamber being moved into position at the New royal Adelaide hospital. A trolley was built to accommodate the chamber and move it through the carpark area to its new home inside the hospital. The Hyperbaric unit is currently being built around the chamber and the New Hospital is scheduled for completion in 2016. 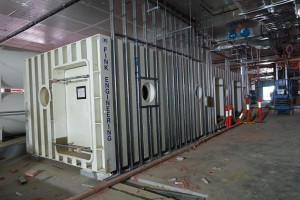 The triple lock Hyperbaric chamber in position at the New Royal Adelaide Hospital as construction work continues. This picture shows the process of cladding the chamber to allow it to blend into the hospital decor. 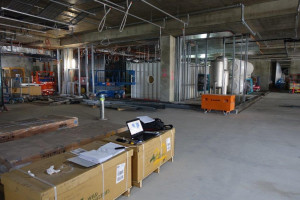 View from outside the Hyperbaric area showing the chamber, fire deluge tanks and air receivers as hospital contractors build the hyperbaric unit around the chamber. 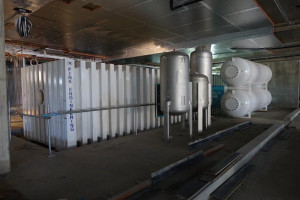 Rear View of the New RAH triple Lock Hyperbaric chamber in situ. The three deluge tanks (silver) and two Air Receivers (white) in their temporary position to allow the dividing wall to be built.

← Mobile Equine Hyperbaric Oxygen Therapy Equine Hyperbaric Oxygen Therapy →
© 2022 Fink Engineering "Designing square pegs for square holes"
This website may contain links to other websites outside the domain www.fink.com.au. Because the these websites are not the responsibility of Fink Engineering Pty Ltd, by use of this website you agree that Fink Engineering is not responsible for the availability of such external sites, and does not endorse and is not responsible or liable for anything on or available from such sites or resources. Further to this you acknowledge and agree that Fink Engineering shall not be responsible or liable, directly or indirectly, for any damage or loss caused or alleged to be caused by or in connection with use of or reliance on any such external site.