The pressure vessel has been fabricated and hydrostatically tested at W.E. Smith Engineering in Coffs Harbour NSW, and is now painted and in our shop for outfitting and functional testing.

The Chamber and with supporting plant will be installed in the new hospital before Christmas with completion and testing to take place early next year. 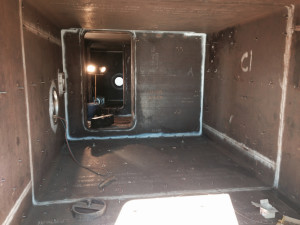 The New Royal Adelaide Hyperbaric Chamber during construction phase. Chamber is orientated upside down to facilitate welding of attachment points on the roof 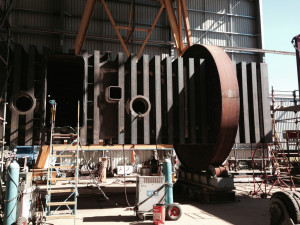 New Royal Adelaide Hyperbaric Chamber during Construction, temporary rollers are welded to the chamber to allow it to be turned during construction. 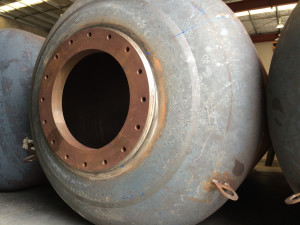 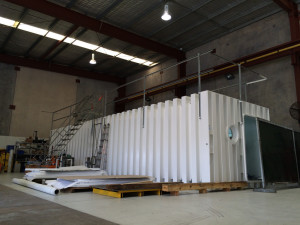 ← Hennepin County Medical Centre; Minneapolis, USA SNDL Medical Lock Closure →
© 2021 Fink Engineering "Designing square pegs for square holes"
This website may contain links to other websites outside the domain www.fink.com.au. Because the these websites are not the responsibility of Fink Engineering Pty Ltd, by use of this website you agree that Fink Engineering is not responsible for the availability of such external sites, and does not endorse and is not responsible or liable for anything on or available from such sites or resources. Further to this you acknowledge and agree that Fink Engineering shall not be responsible or liable, directly or indirectly, for any damage or loss caused or alleged to be caused by or in connection with use of or reliance on any such external site.